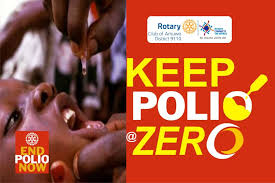 Rotary International Polio Eradication Committee in Kwara state has announced a lineup of activities to mark this year’s World Polio Day, with the theme “Keep Polio at Zero”.

According to a statement issued by the Kwara state representative to the Nigeria National Polio Plus Committee, Otunba Rick Oladele, the 2019 World Polio Day will commence with the appearance of members of the committee at selected radio stations today.

Jumat Prayer of thanksgiving is to be held tomorrow at 1:30pm at A.K Adisa Jumat Mosque while a thanksgiving service will hold at UMCA Chapel, Tanke, Ilorin on Sunday, the twenty-seventh of October by 10am.

The statement also disclosed that a walk to “ Keep Polio at Zero” in Nigeria is scheduled to hold in Ilorin on Saturday by 7:30 am.

The walk is to be flagged off by Governor Abdulrahman Abdulrazzaq and the Chairman, State Task Force on Polio and immunization, and His Excellency, the Deputy Governor, Rotarian Kayode Alabi in front of the Banquet Hall, Government House.