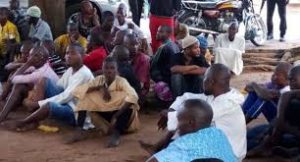 The Kwara State Police command has rescued one hundred and eight people, including children, from an illegal rehabilitation centre located at Gaa Odota in Ilorin, the Kwara State capital. The owner of the centre, Abdulraheem Owotutu, claimed that centre was meant for teaching people Islamic and Arabic as well as healing of mentally ill people, drug addicts and stubborn children.

Speaking during their parade at the command headquarters in Ilorin, the Police Commissioner in the state, Kayode Egbetokun, said the place was discovered through intelligence gathering and was busted after surveillance of the for some days.

Some of the inmates, Collins Owonifaari and Warith Hussein, who said they had spent over four months, explained that they were being tortured on daily basis. They disclosed that their parents paid over one hundred thousand naira for a start and still pays fifteen thousand monthly for their upkeep.

There were children and young ladies among the inmates one of whom disclosed that they were usually raped by one of the owner’s brothers and his sons. Police have started contacting some of the parents as at the time of filing this report.