EFCC arrests two brothers, eight others for Fraud in Ilorin 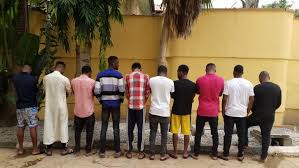 The Economic and Financial Crimes Commission, Ilorin Zonal office, has arrested two brothers and eight others over alleged internet fraud and other fraud-related offences. This was contained in a statement issued on Thursday in Ilorin by Mr Wilson Uwujaren, the Commission’s Head of Media and Publicity.

Uwujaren said that the suspects were arrested on Monday at Basin Area of Ilorin, following intelligence reports over their involvement in internet fraud and other fraud-related offences. He said that items recovered from the suspects include charms, phones, laptops, fake currency among others. Uwujaren stated that the suspects will soon be charged to court.