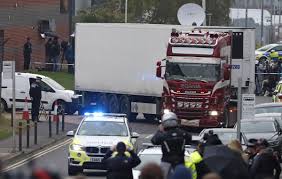 Chinese embassy staff members are heading to Essex in Britain to verify reports that thirty-nine people found dead in a truck were its nationals, the foreign ministry said today.

The victims were discovered in a container on the back of a truck in Grays, east of London, on Wednesday, shortly after arriving by ferry from Belgium. The British police has confirmed that the victims are believed to be Chinese Nationals.

The truck was moved Wednesday to a more secure location at nearby Tilbury docks so the bodies could be removed. British media cited unidentified sources as saying on Thursday that the victims, thought to be 38 adults and one teenager, are Chinese nationals.

The Chinese foreign ministry said it is in close contact with the British police to seek clarification and confirmation of the relevant reports. The shocking discovery comes almost two decades after the bodies of 58 Chinese people were discovered in a Dutch truck at the southeastern English port of Dover.