Again PDP bombs President Buhari, says he has nothing to present to UN 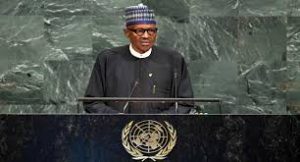 As President Muhammadu Buhari departs Abuja for New York, USA, to participate in the seventy-fourth Session of United Nations general Assembly, the opposition Peoples Democratic Party, PDP, has berated him, saying that he has no agenda and did not articulate any definite objectives, plans and proposals to attract tangible benefits to the nation.

Recall that Presidency had said that President Buhari will use the opportunity to articulate the priorities of the Nigerian government to the world.

But in its reaction, PDP through its National Publicity Secretary, Kola Ologbondiyan, said  attending such an important meeting of world leaders and policy makers without a clear-cut national agenda shows that the Buhari Presidency is not committed to Nigeria but only going out for another showboating on the international platform.

The PDP tasks him to use the opportunity to address world leaders on the reports by the European Union (EU), African Union (AU) and other international bodies, detailing alleged heavy manipulations of the 2019 general elections to favour him and his party.

It also urged the President to address the world on reported issues of violations of human rights, disregard for court orders and alleged swelling corruption under his watch.