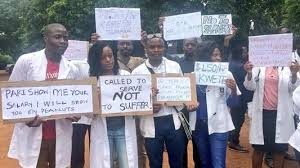 Zimbabwe has fired more than 200 public sector doctors who have been on strike for more than two months demanding better pay to protect them from soaring inflation.

The doctors were dismissed after disciplinary hearings held in their absence, as President  Emmerson Mnangagwa’s government takes a hard line against a restive labour force.

Other public workers say they cannot go to work because they have no money. Police on Wednesday blocked a handful of public sector workers from marching to government offices with a petition demanding better pay.

Junior and middle level doctors from state hospitals have been on strike since Sept. 3. They want their pay indexed to the U.S. dollar to stop their earnings being eroded by triple-digit inflation.