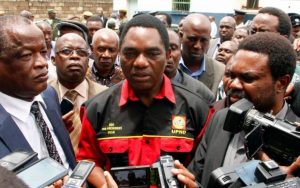 The Bank of Zambia said in a written submission to parliament in Lusaka that the National Assembly should ensure the government proposed constitutional changes failed.

“It is our considered view that National Assembly oversight is critical over these important public functions in a democratic dispensation like ours,” the Bank of Zambia said.

The government proposed constitutional changes in August to remove lawmakers’ right to approve new government loans and the ratification of international treaties – triggering an outcry from rights and opposition groups.

The government has said the changes are needed to get loans and treaties through when parliament is in recess.

Opposition politicians have accused President Edgar Lungu of trying to crack down on dissent – a charge dismissed by the government.

The proposed changes come as the government has increased public debt – drawing warnings from the International Monetary Fund.

A parliamentary committee is receiving submissions on the proposed constitutional amendments before presenting a report to the full assembly for debate.

The government requires a two-thirds majority in parliament to pass the amendments. No date has been set for a vote.

The Law Association of Zambia has also taken the matter to the constitutional court seeking to have the draft law withdrawn.