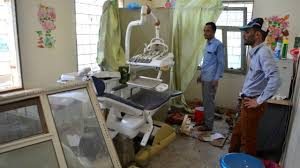 A Saudi-led coalition fighting in Yemen has expressed “deep regret” over a decision by the Doctors Without Borders (MSF) medical aid group to evacuate its staff from the north of the country.

MSF said on Thursday that it was pulling its staff from six hospitals in northern Yemen after a coalition air strike hit a health facility operated by the group, killing nineteen people.

The coalition in a statement carried by Saudi state news agency SPA, said it is seeking an urgent meeting with the aid group. The coalition also said it is committed to respecting international humanitarian law in all its operations in Yemen and has set up an independent team to investigate incidents in which civilians were killed.

MSF is one of handful of international aid groups operating on the ground in Yemen where a sixteen-month civil war between a Gulf Arab coalition and the Houthis-rebels allied with Iran, has killed more than six thousand, five hundred people and brought one of world’s poorest countries close to famine.