Osinbajo to act as President Buhari proceeds on medical vacation: 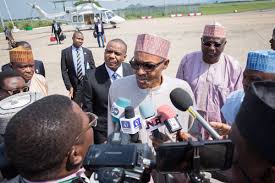 President Buhari speaking to newsmen at the airport before his departure.

During a brief interaction he had with journalists before leaving the Presidential Wing of the airport, Buhari was asked to react to the tension being created that the President of the country is sick. At that point, the President asked the reporters if there was anybody that does not fall sick. He also said a letter has been sent to the leadership of the National Assembly in that regard.

Addressing newsmen in Abuja, Dr. Ibe Kachikwu, called on the militants to shelve violence, sheathe their weapon and embrace dialogue with government. According to him, the national security adviser (NSA), Babagana Monguno, is to lead government delegation to the dialogue expected to wrap up in one week.

On the list published, the Federal Government said it had recovered a total of one hundred and fifteen point seven billion naira cash, while assets worth over one point nine trillion naira had been frozen in one year. Many individuals and groups had criticised the government for not publishing the names of those the monies were recovered from, but Osinbajo said such publication may jeopardise investigations. 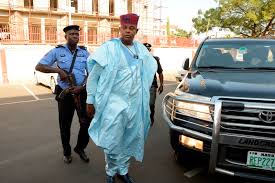 The Tribunal therefore held that the APC was legally right to substitute its candidate due to force majeur as the election was declared inconclusive. However, addressing a news conference in Abuja after the verdict, Faleke faulted the Tribunal for failing to examine the whole merit of his case and vowed to appeal the judgment. 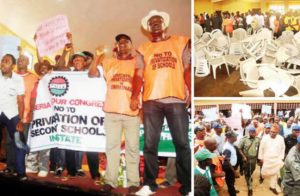 Students on Monday took to the streets protesting in solidarity with the union and vandalising property in the process.

Adelegan said that the strike action would continue until labour’s demands were met. Among demands listed were the withdrawal of all charges levelled against seven NLC leaders by the police. Labour also said government should immediately pay workers and pensioners their six months outstanding salaries and pensions while rescinding its decision to sell-off any public school in the state.

It further directed those who did not subscribe for online printing to start collection of Call-up letters from Thursday the ninth of June from their various institutions of graduation. The orientation course will end on Wednesday twenty-ninth of June.

Police Recruitment: No Chance for Applicants with Tattoo on Their Bodies:

Amaraizu said that the present recruitment is for degree holders and will last for three weeks after which, the selected ones will proceed for the written interview. He said over-aged people, tattooed persons, falsified results, statement of results over five years and people with some physical impediments will be disqualified.

A close family source who spoke under the condition of anonymity disclosed that she before her demise, she was battling diabetes for a while, causing her sugar level to fluctuate. Henrietta was until her death, married to the former president of the Association of Nigerian Theatre Arts Practitioners (ANTP), Kosoko.

On to the foreign scene…

Protests in Kenya as opposition marks Day of Rage:

The Coalition for Reforms and Democracy (CORD) alliance, which alleges that the electoral body is biased towards the president, has been staging weekly protests every Monday. Protests took place in several towns but in Kisumu, an opposition stronghold, police opened fire before using tear gas and water cannon.

Intelligence chief, Vasyl Hrytsak said the twenty-five year old had planned fifteen attacks and was driven by ultra-nationalist views. He had amassed guns, and detonators. Mr Hrytsak listed bridges, motorways, a mosque and a synagogue among the suspect’s potential targets.

And now in Sports

Coach of the U-23 team, Samson Siasia

Speaking at the post-match press conference, Siasia said the experience in Korea was overwhelming and will help his team back home to start making corrections. The former Super Eagles chief coach said the team has also realised the areas where it needs to improve on and those players that need to be injected into the team.

Mahrez signed a contract extension with Leicester in August 2015 and is currently earning thirty-five-thousand-pounds-a-week. The Algerian has attracted interest from the likes of Arsenal and Paris Saint-Germain. Arsenal are waiting on teammate, Jamie Vardy to decide whether he will accept the Gunners’ one-twenty-thousand-pounds-a-week contract offer but have not set a deadline for the player’s decision.