Welbeck out for nine months after knee surgery 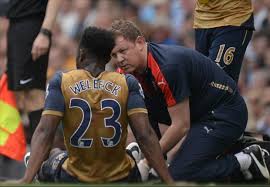 Arsenal have confirmed striker Danny Welbeck will be out for nine months following surgery on his right knee. The twenty-five-year-old was forced off in the first half of Sunday’s draw with Manchester City following a coming together with Bacary Sagna, and will now miss Euro 2016 and a large part of next season.

The England international only returned to action in February this season after missing nearly ten months with an injury to his other knee, which also needed surgery. Welbeck reacted to the news on Twitter, insisting that he “will be back stronger”.