US sacks head of Navy squad nabbed in PG

The United States military has fired the commander of a team of Navy sailors captured by Iran earlier this year over trespassing on the Islamic Republic’s territorial waters in the Persian Gulf.

The Navy said in a statement that it has lost confidence in Commander Eric Rasch, who was the executive officer of the coastal riverine squadron. The statement also blamed Rasch for complacency and failure to maintain standards in the ten-member unit. 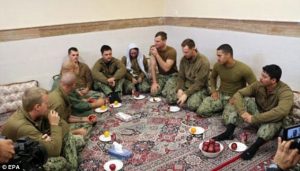 Rasch became the first person to be publicly singled out after a preliminary investigation into the incident that occurred near Iran’s Farsi Island in the Persian Gulf. Several other sailors also received administrative reprimands.

The Navy has not yet released the results of its own investigation into the incident but the US military said the Americans had been intercepted on the twelfth of January, 2016 after the diesel engine in one of their boats developed a mechanical problem.

The sailors were released after intense diplomacy between US Secretary of State John Kerry and top Iranian officials.