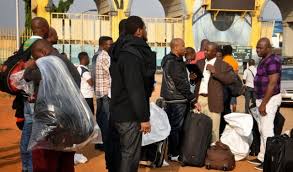 The United Kingdom and Australia on Wednesday jointly deported forty Nigerians alleged to have committed various offences in both countries. The deportees comprise thirty-three males and seven females.

A reliable source at the Federal Airports Authority of Nigeria (FAAN) told NAN that they were deported from their host countries for overstaying their visas and other immigration offences. It would be recalled that fifty Nigerians were deported from the United Kingdom on the twenty-fifth of November, 2015 for similar reasons.