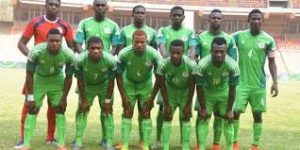 The proposed international friendly encounter between Nigeria’s Under-twenty-three side and their Honduras counterparts earlier scheduled to hold on the twenty-seventh of July, 2016 has been cancelled.

Instead, Samson Siasia’s charges will take on an unnamed team in the United States of America on the same date in preparation for the Rio 2016 Olympic Games. The Nigerian team’s media officer Timi Ebikagboro, who revealed this on Twitter on Thursday, attributed no reason for the cancellation of the friendly.

Samson Siasia has released a list of twenty-two players that will play in the football event of the Rio 2016 Olympic Games.

The 1996 Olympic gold medalists will play Sweden, Japan and Colombia in the group stage of the event.