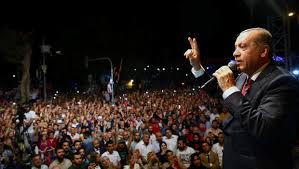 Turkish President Recep Tayyip Erdogan has told a vast rally in Istanbul that he would approve the return of the death penalty if it was backed by parliament and the public. He was speaking to at least a crowd of at least a million who had gathered in Turkey’s biggest city. The rally followed last month’s failed military coup.

Mr Erdogan also said the state will be cleansed of all supporters of the US-based cleric Fethullah Gulen. The cleric is blamed by the Turkish government for the attempted uprising. He denies any involvement. Religious figures and leaders of two of Turkey’s three opposition parties attended the rally. The Kurdish party was not invited.