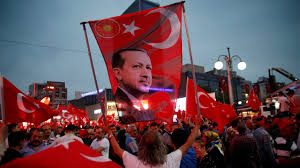 Turkey’s president has declared a state of emergency for three months following Friday night’s failed army coup. Speaking at the presidential palace in Ankara, Recep Tayyip Erdogan vowed that all the viruses within the armed forces will be cleansed. The declaration could be used to extend the detention of nearly ten thousand people rounded up since the failed coup.

More than six hundred schools have been closed and thousands of state workers sacked in a crackdown by the president. German Foreign Minister Frank-Walter Steinmeier responded to Mr Erdogan’s speech by urging the Turkish government to maintain both the rule of law and a sense of proportionality in its response to the coup attempt.