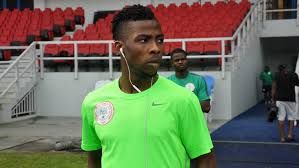 Super Eagles coach Gernot Rohr has left out Kelechi Iheanacho again as he named a 23-man squad for the friendly game against Brazil in October.

The Super Eagles of Nigeria will use the opportunity of the next international to play a friendly game against Brazil on Sunday, October 13 at the National Stadium of Singapore.

Conspicuously missing from the squad list released today is Leicester City forward Iheanacho who is struggling to see game time with the Foxes.

Iheanacho was dropped from the Super Eagles squad to the 2019 Africa Cup of Nations (AFCON) but was recalled for the friendly game against Ukraine earlier in September.  He didn’t play in that 2-2 friendly game after arriving late to camp.

There is however a return of some regulars like Wilfred Ndidi and Kenneth Omeruo who were not part of the squad for the friendly against Ukraine. There is a first-time call-up for Granada star Ramon Azeez-who recently scored against Barcelona– and Peter Olayinka who plays as a forward for Slavia Prague in the Fortuna Liga.