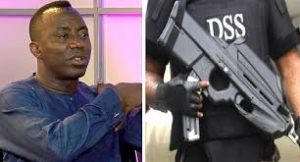 The convener of #RevolutionNow protest and former presidential candidate, Mr. Omoyele Sowore, today, commenced a contempt suit against the Director-General of the Department of State Service, Yusuf Bichi, for allegedly disobeying the order granting him bail.

Justice Taiwo Taiwo of the Federal High Court in Abuja had on Tuesday granted bail to Sowore, who has been arrested and kept in the custody of the DSS since August 3, 2019, on the allegation of calling for “revolution” through the protest that was scheduled for September 5.

The judge had dismissed DSS’ objection in granting him bail with the sole condition that he deposit his passport in the registry of the court. Sowore, through his lawyers, submitted his passport to a Deputy Chief Registrar of the court on Wednesday.

The legal team also filed an affidavit of compliance with the order of the court and had same served on the DSS. But 24 hours after meeting the bail condition, the DSS has yet to release him.

The publisher of Sahara Reporters, through his lawyer, Mr. Femi Falana (SAN), otoday, filed a ‘Notice of consequence of court order’ which is to be served on the DSS boss warning him that he could be jailed for continuing to violate the court order.