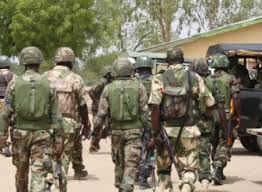 The soldiers were said to have stormed one of Ndigbara’s houses in Bua-Yeghe, Gokana Local Government Area of Rivers State from the 2 Brigade base of the Nigerian Army, at about 5.30pm on Sunday.

The soldiers also carried out a similar operation at the home of the ex-Niger Delta agitator in Port Harcourt on Monday.

“Men of 2 Brigade Nigerian Army relying on credible intelligence conducted a raid operation on Sunday 11 January 2016 on the residence of one Mr. Solo also known as “General Solo” in Gokana Local Government Area of Rivers State.

“Mr. Solomon Ndigbara is suspected of gun running and kidnapping activities. Sadly, supporters of the suspect mobilised and staged a protest against the raid.

“During the protest, several property belonging to the suspect and other innocent citizens were destroyed. Investigation into the suspected criminal activities of Mr. Solomon is ongoing.

“The Brigade enjoins all law-abiding citizens in the area to go about their lawful activities as the military will continue to work assiduously to ensure the protection of lives and property of all,” the statement read.

Sources said the whereabouts of Ndigbara’s wife, Kate, and his two younger brothers identified as Bariagan and Gabriel Ndigbara remained unknown after the soldiers’ operation.

It was learnt that the soldiers destroyed two vehicles; a Toyota Sienna and Lexus SUV, even as sources said that some rooms in Ndigbara’s Bua-Nyeghe home were ransacked while some property inside the rooms were damaged.

In his reaction, the Chairman of Gokana Local Government Area, Mr. Austin Sor, described the operation as an onslaught, shocking and unwarranted.

Sor said, “It is pathetic and a war declared on Chief Solomon Ndigbara and the people of Bua-Yeghe. To me, this is a political war.

“Yesterday at about 4pm, I was in the community field watching a final match when some of my community boys came to call me and asked if I am aware that Army has taken over the community.

“When I got there, actually, what I saw were heavily armed soldiers with 10 vans in the compound of Solomon Ndigbara. An attempt to get their attention to know who sent them was seriously resisted. Even the paramount could not access them.”

The CTC chairman accused leaders of the All Progressives Congress in Ogoni of being behind the military invasion of Gokana.

“We received the shocking news yesterday (Sunday) that the military had besieged this premises. You can see the extent of the damage here. They were shooting sporadically, damaging property and everything.

“I don’t know which court, where Solomon Ndigbara has been tried and found to be guilty of whichever offence for him to deserve this kind of onslaught. I want to put it clear that this onslaught is on the entire youths of Ogoni,” Tambari added.

But the state Publicity Secretary of the APC, Mr. Chris Finebone, cautioned that the party should not be linked with security operations, adding that issues on security should be taken to security agencies.