Written by Morenike Adebayo on April 4, 2016 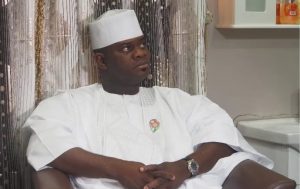 The Kogi State governor, Alhaji Yahaya Bello, has revealed that the committee set up on the verification of civil servants in the state had uncovered a major fraud where 300 ghost workers were smuggled into the payroll of a local government in the state.

Apart from this, the committee also uncovered another 200 names injected into the payroll of one of the government’s organisations by a top civil servant in the establishment.

The governor has, however, vowed to punish those behind the ghost workers syndrome in the state as they had been ripping the state of the resources that would have been used for its development.

Speaking at Okene, headquarters of Okene Local Government Area of the state, at a grand reception organised in his honour by the people of Central Senatorial District of the state, where he was welcomed by a mammoth crowd on Saturday, Bello noted that startling revelations would be made after the completion of the verification exercise.

According to him, the exercise became necessary when it was discovered that more than 90 per cent of the revenue accruing to the state was being used for overhead before the complete fall in the allocation from the federation account.

The governor noted that government directed permanent secretaries and top civil servants in the state, Directors of Local Government Administration, cashiers and treasurers at the local government level to embark on compulsory leave to enable it have a hitch free clean up exercise of the civil service.

Bello said, “We have started cleaning up the civil service. You will not believe the level of subversion of the state’s loyal workforce that our screening team has uncovered. We found one person putting as many as 300 ghost-workers on the payroll of a local government somewhere. And he is just one of many.

“The temptation to use the money available for other things was great, but we have chosen to prioritise the welfare of our workers. In that regard, we have paid two salaries in less than two months. We paid the first batch of salaries across board and without asking too many questions even though we knew the nominal rolls were compromised.

This was to help actual workers who needed money to handle their responsibilities.

“The second batch we paid with the personal guarantee of the Head of each MDA because we reasoned that change begins with each of us, and a leader should know those working under his immediate supervision. By the time we conclude the screening, it is our intention that only actual workers will be taking salaries from the state.”

He however, disclosed that those behind the fraud in the nominal payroll of government would not go scot free, saying “we will also let the law take its course with those suspected of putting ghost workers into the system.”

The governor told the crowd that he met the state that was severely challenged in many ways like backlog of salary arrears to civil servants, huge debt burdens, insecurity and deteriorated infrastructure.

He said his administration decided to embark on a quick win solution to some of the challenges which have started yielding results while others will take a little time to mature.

He however, said the construction and rehabilitation of roads and drainages were ongoing in the state, adding that his administration would strive to place the state in a good stead than he met it.

The Ohinoyi of Ebiraland, who is also the paramount ruler of the land, Alhaji Ado Ibrahim, said the people of the entire district were proud of the governor because of his courage to stand against all odds.

The Ohinoyi therefore, appealed to him to do things differently from his predecessors in order to impact on the lives of the people in the state who have been faced with abject poverty and squalor over the years.

“You are a governor of all, an Okun, Igala or Ebira, and that is why you must do something differently from others,” he stated.