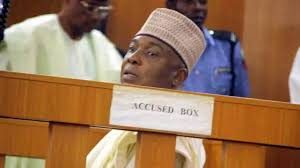 The Senate on Tuesday clarified its position on the proposed amendment of the Code of Conduct Bureau and Tribunal Act.

The upper chamber said the proposed amendment will not affect the ongoing case of its President, Bukola Saraki before the tribunal.

A statement issued by Chairman of Senate Committee on Media and Public Affairs, Senator Aliyu Sabi Abdullahi, said many of the comments on the proposed amendments were made by those who have neither read the bill nor understood the principles behind it.

Abdullahi said since the Saraki case commenced in 2015, any amendment of the law in 2016 cannot retroactively affect an ongoing case.

He added that the proposed amendment would still take a minimum of six months given the long process that law making requires.

According to him, the processes include committee hearing, public hearing, report back to Senate committee of the whole, the concurrence in the House of Representatives and assent by the President at the final stage.

He said, “There is no way we will even complete the process of finally effecting the amendments before the completion of the Saraki case. So those who read selfish or ulterior motives to this ordinary legislative activity are either mischievous or ignorant of legislative procedures.”

Abdullahi noted that the sole aim of the amendment was to give effect to the right to fair hearing as enshrined in Section 36 of the 1999 Constitution and the recent pronouncements of the Supreme Court.