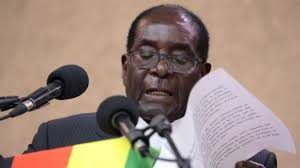 Zimbabwean President Robert Mugabe has criticized judges who give permission for anti-government protests which later turn violent. He said the judges show a reckless disregard for peace, and warned that they should not dare to be negligent when making decisions.

The opposition has accused him of trying to intimidate the judiciary.

On Monday, the fifth of September, 2016, opposition supporters are going to court to challenge a two-week ban on demonstrations. There have been a number of violent protests in Zimbabwe in recent weeks as the country’s economic crisis deepens.

The president recently warned protesters there would be no Zimbabwean uprising similar to the “Arab Spring”. He has routinely blamed the country’s economic problems on sabotage by Western critics of his policies – which include the seizure of white-owned commercial farms for black people.

The opposition says the latest demonstration ban is unconstitutional and has approached the High Court to challenge it.