Qatar has become the latest country to back Saudi Arabia in its diplomatic row with Iran. 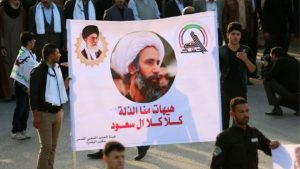 On Wednesday it said it was recalling its ambassador to Tehran. The row followed Sunni-ruled Saudi Arabia’s execution of a top Shia cleric. Protesters in Tehran responded by attacking the Saudi embassy.

Djibouti on Wednesday followed Bahrain and Sudan in cutting ties with Iran. Jordan summoned the Iranian ambassador to protest against the embassy attack. Kuwait earlier recalled its ambassador to Tehran and the United Arab Emirates reduced its diplomatic presence. Iran’s diplomats have now withdrawn from Saudi Arabia in response to Riyadh’s decision to sever ties over the attack.