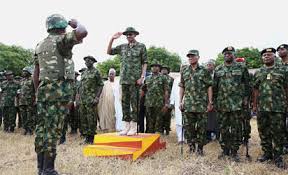 President Muhammadu Buhari on Wednesday flagged off the 2017 Army Day celebrations in Gusau, the Zamfara state capital. He approved the deployment of one thousand troops to tackle armed gangs reported to have taken over a forest in Zamfara State.

The Federal Government also says it will reimburse Zamfara with fifty-seven billion naira soon. The President made the promise when he inaugurated some federal roads constructed by Zamfara Government. He urged Nigerians to go into farming and animal-rearing to diversify the economy. The President, who described Zamfara as a fertile ground where solid minerals could be tapped, also assured that government would facilitate the promotion of mining as part of efforts to diversify the economy.