They did not speak with State House Correspondents at the end of the meeting which lasted about thirty minutes and coming a day after members of the Movement for the Actualisation of the Sovereign State of Biafra (MASSOB) in the south-east engaged soldiers and policemen in a bloody clash. 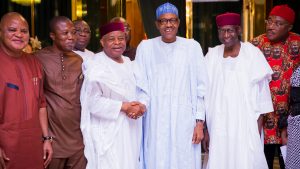