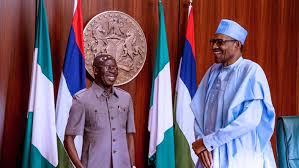 President Muhammadu Buhari on Friday challenged the leadership of the All Progressives Congress (APC) and the APC state governors on the need to institutionalize the party to guarantee its survival beyond the end of his tenure in 2023.

The president gave the challenge when he received APC governors who were in the State House, Abuja, to congratulate him on the Wednesday Presidential Election Petitions Tribunal’s judgment which upheld his election.

Contrary to an earlier position that he was not bothered by the proceedings at the Presidential Election Petition Tribunal, President Buhari confessed on Friday he was under tension while the tribunal delivered its judgment on Wednesday.

Buhari admitted that but for the first meeting of the Federal Executive Council, which he presided over about the same time the tribunal sat, he would have gone into trauma.

In his remarks, APC Chairman Adams Oshiomhole said the judgment was “eloquently and analytically” delivered to clear all doubts on the veracity of the president’s school credentials. He, therefore, assured the president of the party’s loyalty and support.

The Chairman of the Progressive Governors’ Forum, Alhaji Atiku Bagudu, congratulated President Buhari on the victory at the tribunal.

While describing the judgment as clinical, with surgical precision in dealing with all the issues raised, Bagudu assured the president of the support of all APC governors and other governors that had benefited from his leadership.