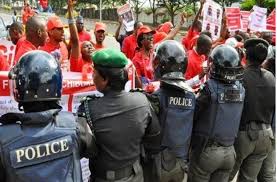 An all female anti-riot police squad on Thursday blocked the BringBackOurGirls coalition members from accessing the Presidential Villa, Abuja.

The campaigners were protesting the failure of the Federal Government to locate and rescue the missing 219 Chibok schoolgirls from Boko Haram captivity two years after they were abducted from the Government Secondary School, Chibok.

The policewomen, led by the Asokoro Divisional Police Officer, CSP Grace Alonge, blocked the entrance to the villa and prevented the BBOG members from going to the seat of power where they had planned to hold a world press conference on the plight of the girls.

Alonge informed the campaigners that she could not allow them to access the Aso villa for security reasons.

The BBOG Co-Convener, Dr. Oby Ezekwesili, cautioned the members against being unruly and directed them to seat on the road, where the conference subsequently held.

She described as unfortunate the refusal of the police to allow the BBOG to visit the seat of power, saying it was inappropriate.

Other coalition members were surprised by the blockade and one of them, Maureen Rubik, said that the Muhammadu Buhari administration came to power on the stream of the missing girls, noting that the BBOG members were once labelled as being members of the All Progressives Congress.

“I cannot believe that the government would prevent us from accessing the Presidential Villa. This is an administration that came to power on the stream of the missing girls following the incompetence of the former government which was voted out by Nigerians,” she noted.

Esther Yakubu, whose daughter was among the missing girls, expressed anguish at not seeing her child for two years, adding that but for the BBOG movement which kept the issue on the front burner, the matter would have been swept under the carpet.

She expressed veiled anger at the police authorities for preventing the campaigners from entering the Aso Villa grounds, stressing that the Chibok parents never invited Boko Haram to abduct their daughters.

“We did not invite Boko Haram to abduct our daughters and if you are a parent, you will know what it takes to have a child. Why are the police stopping us from expressing our pains and anger over the abduction of our daughters,” she asked.

The BBOG, in a statement, recalled Buhari’s inaugural speech in which he said the nation could not claim to have defeated Boko Haram until the Chibok girls had been rescued.

It said it was for this reason that parents of the Chibok girls, their community and the movement were devastated by the feedback from  the President that he had no intelligence on the girls’ location.

“We are still puzzled  at the fact that the President, in our meeting of January 2014, inferred that the Chibok girls had not been rescued because the government ‘lacked credible intelligence on the whereabouts of the girls’,” Aisha Yesufu, who read the statement said.

The group cautioned that the most important activity it expected from the government and countries with capabilities to support the rescue effort for the girls, was to act without any further  delay.

It said, “Our government must lead a well-coordinated, coherent, sustained and results-focused “SWAT” search and rescue team that mobilises every possible intelligence assets available anywhere in the world to rescue our Chibok girls and all other citizens still languishing in the den of terrorists.

“Anything short of that will be deemed a blight on our bond of shared humanity. We believe that the so-called ‘Proof of Life’ video would be a good place to start in scrutinising every possible lead that is provided our government on the whereabouts of our citizens.

“It should, as it intensifies the rescue operation, use the government-civil society roundtable to constantly provide progress reports of the operation and other related activities.”

The movement stated that Nigeria and the world had failed the schoolgirls, noting that two years is unacceptably a long time for young women to be left as captives of terrorists.

The group said that it would not stop reminding the President of his constitutional mandate and his personal pledge to rescue the Chibok girls, stressing that for 731 days it had advocated relentlessly and shall continue until the girls were rescued.

The BBOG further said, “The symbolism of our march to the gates of the State House, the seat of power of Nigeria, is to reiterate that the rescue of our Chibok girls, other victims of terrorism, resolving the humanitarian crises in the North-East of our country, tackling the grossly worrying problems of Agatu; disclosing all military  misdemeanors against civilians in their communities across the country, tackling the problem of ‘endangered education’ of millions of children in Internally Displaced Persons’ camps nationwide, are the primary duties of governments led by the federal authorities in Nigeria.”