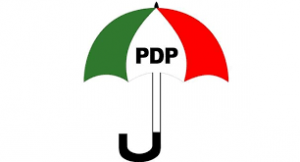 The Peoples Democratic Party (PDP) has charged the Police, Military and Department of State Services (DSS) high commands to, without further delay, secure the release of its National Youth Leader, Hon. SKE Ude-Okoye, who was attacked and abducted by gunmen in Enugu on Monday.

In a statement by its spokesman, Mr Kola Ologbondiyan, the PDP expressed shock at the abduction and condemned it as cowardly and reprehensible.

The party described the abduction of the Youth Leader as a national challenge and a direct attack on the body of the nation’s youth population, which he symbolizes.

It cautioned that the development is capable of aggravating the already tensed security situation in the country if not confronted with corresponding security response.

The party said it is particularly worried about the safety and lives of the Youth Leader and his staff, who was also abducted by the gunmen.

The PDP therefore charged the top command of the Police, the DSS and the military to step into the issue with full force to ensure the immediate release of the Youth Leader as well as track down those behind the dastardly act.

According to the PDP, Hon. Udeh-Okoye has always been at the forefront in efforts towards the development and wellbeing of the youth across the nation and urged the security forces to leave no stone unturned to secure his release.

The party lamented the pervading insecurity in the nation and urges the Security authorities not to relent in their efforts and sacrifices in combating acts of terrorism and violence against innocent citizens.

The PDP said it appreciates the outpouring of concerns from well-meaning Nigerians over the development, even as it urges its teeming members and supporters, particularly the youth, to remain calm as the security forces up their rescue efforts.