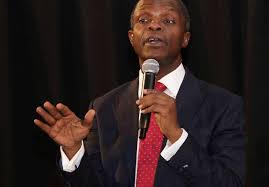 Vice president, Yemi Osinbajo Tuesday presided over a crucial meeting with some ministers at the presidential villa, Abuja. The meeting which was not open for media coverage was believed to have centered on the controversial 2016 budget estimates. The meeting is preceding the meeting of the Federal Executive Council, FEC which is expected to finally take a stand on the budget. A lot of apprehension is being raised as it was not certain what decision it would take on the budget. But Vanguard gathered that the meeting would look into all grey areas that had formed subjects of controversy occasioned by the alleged distortions by the National Assembly with a view to adjusting the budget in line with the economic policy agenda of present government. At its last session presided over by the Vice President penultimate week, the ministers had met to discuss the budget passed by the Lawmakers.