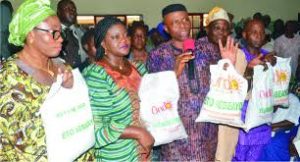 The second phase of the distribution of the Ondo State government initiated palliative (Eto Igbe-Ayo) programme, where foodstuff are given to women for free, begins today in Ose Local Government. The programme rounded off distribution of foodstuffs in the four local governments in Akoko area of the state last Friday, following the flag off in Ikare, Akoko North East local government, where the programme reportedly recorded over 5,000 beneficiaries.

Designed for the 18 local government areas and targeted at 100,000 women in the state, irrespective of party affiliation, the food distribution, according to Commissioner for Information Kayode Akinmade while briefing reporters yesterday, will move to Owo Local Government tomorrow. He said it will be the turn of Ese-Odo and Okitipupa Local Governments on Wednesday.