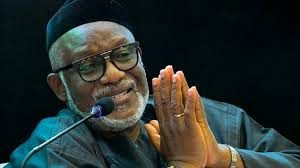 The athletes and coaches, representing Ondo State in the ongoing National Youth Games holding in Ilorin, Kwara State, have accused the management of the Ondo State Sports Council of withholding their allowances for the competition.

The athletes lamented that they had not been paid any allowance since the games started a few days ago and there was no sign from the management of the sports council that the money would be paid, even after the competition.

They also lamented that they had been competing in starvation in the 10-day events for athletes whose ages are not more than 15 years. To this end, the athletes vowed not to return to Ondo until their allowances were paid. The NYG started on September 7 and will end on September 17, 2019.

One of the coaches, Mr. Moses Usifo, who spoke with journalists on behalf of the aggrieved athletes and coaches, accused the state government and the management of the sports council of negligence, describing the act as wicked and barbaric.

In his reaction, however, the state Commissioner for Sports and Youths Development, Mr. Dotun Owanikin denied the allegations, saying the athletes were not owed.

He said that the remaining of the officials’ allowances had been scheduled for payment shortly after the games while all the athletes have been fully paid.