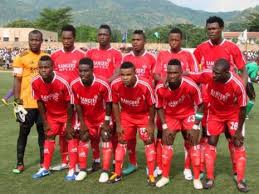 The Pride of Rivers now have forty-seven points and remain third in the table behind Rangers and Wiki Tourists. The game was called off after thirty-six minutes on Thursday after a heavy downpour rendered the pitch unplayable.

The visitors who are now destined for a return to the Nigeria National League battled gamely in the encounter but conceded two quick goals in the second half which condemned them to another defeat.

Aloma Idris put the hosts ahead when his free kick was deflected into the net three minutes after the break. Eight minutes later, his corner kick was nodded home by Onyekachi Okafor to make it two-nil for Stanley Eguma’s men.

Ikorodu United came close to reducing the deficit on the dot of ninety minutes when Muoghare Dede’s shot hit the crossbar.