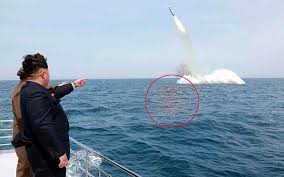 The US military detected and tracked the missile launch at 5:33am Korea time, or 20:33GMT on Thursday, a defence department spokesman said in a statement. The missile did not pose a threat to North America, it added.

“We call again on North Korea to refrain from actions and rhetoric that further raise tensions in the region and focus instead on taking concrete steps towards fulfilling its international commitments and obligations,” the official said.

An official at the South Korean defence ministry said North Korea attempted a missile launch early on Friday but it appeared to have failed. The official could not confirm the type of missile.

Yonhap, citing a number of South Korean government sources, reported a mobile launcher was spotted carrying up to two Musudan missiles on Thursday following North Korea’s fourth nuclear test in January and a long-range rocket launch the next month, which led to fresh UN sanctions.

Analysts speculated the North would fire the Musudan missile with a design range of more than 3,000km. It is not known to have been flight-tested previously by Pyongyang.

Some analysts said North Korea may choose to test-fire the Musudan in the near future as it tries to build an intercontinental ballistic missile designed to put the mainland United States within range.

US intelligence estimates say North Korea’s ability to reach the United States is low, but its capabilities will increase, making continued investment in missile defence essential.

The US, which has 28,000 troops stationed in South Korea, said it was aware of reports that North Korea was preparing to test intermediate-range missiles and was closely monitoring the Korean peninsula

Admiral Bill Gortney, the officer responsible for defending American airspace, told a US Senate hearing on Wednesday that he agreed with a South Korean assessment that North Korea was capable of putting a nuclear warhead on a medium-range missile that would reach all of South Korea and most of Japan.

The US and South Korea began talks on the possible deployment of a new missile-defence system, the Terminal High Altitude Area defence (THAAD), after the latest North Korea nuclear and rocket tests.

North Korea, which regularly threatens to destroy South Korea and the US, often fires missiles during periods of tension in the region or when it comes under pressure to curb its defiance and abandon its weapons programmes.

In March, the North Korean government released a video depicting a nuclear attack on the US. The four-minute state media video – entitled “Last Chance” – showed a digitally created scene of a missile being fired from a North Korean submarine and wiping out the US capital

South Korean analysts have said North Korea may choose to display a show of force before a major ruling-party congress in May, where it is expected to declare itself a nuclear power, or around the April 15 anniversary of the birth of Kim’s grandfather, Kim Il-sung.