No factions in PDP, only contending interests – Ekweremadu 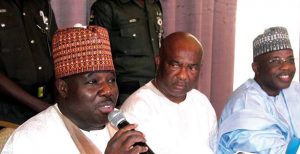 The Deputy President of the Senate, Ike Ekweremadu, has dismissed reports purporting the existence of factions in the Peoples Democratic Party, describing them as false, and misguided. Ekweremadu stated this on arrival from Port-Harcourt, where he attended the Saturday national convention of the party. Senator Ali Modu Sheriff was removed by members of the party as the national chairman at the convention in Port Harcourt, and was replaced by Senator Ahmed Makarfi, who is to serve as the interim National Chairman of the party.

Ekweremadu, who was in the company of Makarfi, said what exists within the PDP are only contending interests, which, according to him, are normal in any political family. He maintained that the convention did not conduct any elections, but simply acted within its constitutional powers as the highest decision-making organ of the PDP to appoint an interim NWC to oversee the affairs of the party and also conduct elections into the NWC positions within ninety days.