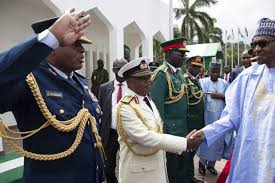 THE climax of the 59th independence anniversary of Nigeria was held at the forecourt of Presidential Villa, Abuja, where President Muhammadu Buhari hosted dignitaries to a special military parade and change of guard.

The Federal Government had announced that the celebration of this year’s independence would be marked with low-key but the event on Tuesday was colourful and characterized with pomp and circumstance.

The anniversary which was devoid of the traditional march past and other such activities that would have been held the Eagle Square, on Tuesday climaxed with a special parade by officers and men of the Guards Brigade at the forecourt of State House with President Buhari as Special guest of honor.

The guests at the independence including Vice President Yemi Osinbajo, SAN, were treated to a synchrony of special rifle and silent military drills and other series of displays by soldiers of the 177 and 7 Guards Battalion respectively.

Former Vice-President to President, Goodluck Jonthan, Arc Namadi Sambo of Peoples Democratic Party (PDP) and former Head of state, Gen Yakubu Gowon, were among the guest that graced the occasion.