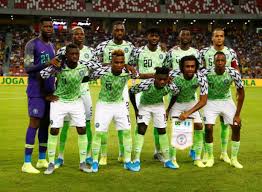 The Super Eagles of Nigeria have dropped by one spot on the latest FIFA world ranking. According to the report published by the world’s football governing body today, the Eagles slipped to thirty-fifth spot in the month of October.

The team scored garnered one thousand, four hundred and eighty-one points as against 1482 points recorded in the month of September.

Despite the slight drop, Nigeria remain the third-best team in Africa behind leaders Senegal and Tunisia who sit twentieth and twenty-ninth respectively.