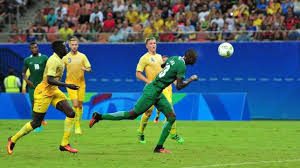 The Nigeria under-twenty-three football team in the early hours of today qualified for the quarterfinals of the Olympic Games football event after a one-nil victory over Sweden. Determined to dictate the pace of the match, the Dream Team six went on an early rampage with Umar Sadiq and Mikel Obi forcing saves from Sweden’s goalkeeper, Linde Andreas, in the ninth and tenth minutes respectively.

Oghenekaro Etebo, who banged four goals past Japan’s goalkeeper in their first game of the competition, was denied time after time by Andreas. Sadiq finally broke the deadlock at the thirty-ninth minute when he nodded home a looping cross from Stanley Amuzie. Nigeria top the Group B table with six points  ahead of Colombia; who have a game in hand and a point, Sweden are third with one point, while Japan are bottom of the log with no point and a game in hand. Nigeria next play Colombia at the Arena dos Corinthians in Sao Paulo on Wednesday evening.