Written by Morenike Adebayo on March 6, 2016

Former First Lady Nancy Reagan has died at home in California at the age of 94. 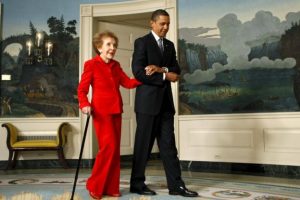 Mrs Reagan had been in failing health in recent years

Mrs Reagan, who had been living in Bel Air, Los Angeles, died of congestive heart failure, the Reagan library said.

Her 52-year marriage to Ronald Reagan was once described as the US presidency’s greatest love affair.

From 1981-89 she was one of the most influential first ladies in US history; initially criticised for an expensive renovation of the White House, but later becoming a much-loved figure.

She will be buried next to her husband, at the Ronald Reagan Presidential Library in Simi Valley, California, the library said in a statement.