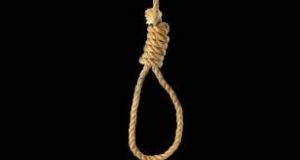 A forty-eight-year-old landlord on Tuesday hanged himself in Ibadan, leaving behind a three-page suicide note. The incident happened in Idi-Ose along Akan road in Ona Ara Council Area of the city.  Residents of the area said the deceased, Popoola Adepoju, who is a father of three sent his children on an errand before taking his own life.

Adepoju’s wife told the police that her husband left the defunct National Electric Power Authority in Abeokuta two years ago but his entitlement was yet to be paid. She added that he had engaged himself in cement business on a small scale before his death. A landlord in the area, who did not give his name, however gave a hint that the deceased was going through a difficult period. This is coming days after a manager with the First City Monument Bank (FCMB), Mr Olisa Nwokobi reportedly shot himself in Lagos over a huge loan he was allegedly owing.