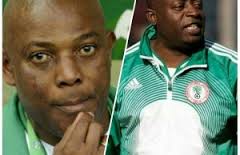 The Lagos State Government in conjunction with the Sports Writer’s Association of Nigeria and the Nigeria Football Supporters Club, have set up a committee that will help plan the Lagos Farewell Testimonial Match in honour of former Super Eagles coaches, Amodu Shaibu and Stephen Keshi.

The game is scheduled for the Teslim Balogun Stadium on the twenty-third of July, 2016. The chairman of the committee, Dr. Rafiu Ladipo explained that the event was meant to raise money for the families of the late coaches.

The Farewell Testimonial match will see the Super Eagles players battle against Lagos All Stars team in the main match of the day, while the curtain raiser will be a game between the Lagos SWAN team and the Supporters Club.