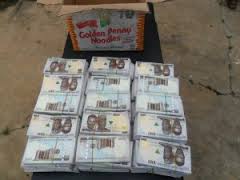 The Kwara state command of the National Drug Law Enforcement Agency (NDLEA) has alerted Kwara residents and Nigerians at large to take proper caution while receiving one thousand naira, five hundred naira notes among others from customers, warning that fake currency is currently circulating round the state.

The state commander of the NDLEA, Reuben Aphe disclosed this while parading a man, Mohammed Adamu who specializes in fake currency trafficking and has a total sum of nine point eight million Naira worth of fake currency in his possession. He said the suspect during investigation revealed having a link with another suspect from Ilorin.

While explaining that the second suspect in Ilorin is still at large, the NDLEA commandant who said the fake currency emanated from Ilorin added that both suspects will face the wrath of law.

As reported by our correspondent, Olarotimi Oshin, the fake currency trafficker Adamu was accosted on the ninth of August by the Jebba area command of the NDLEA during a routine check. Aphe said with the high rate of fake currency in Nigeria, Banks Automated Teller Machines ATM now dispense fake currency which according to him remains a serious challenge to the nation’s economy.