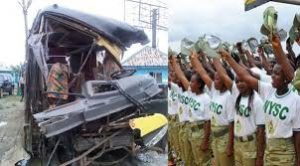 The Kwara state governor Abdulrasaq Abdulrahaman has commiserated with the families of the deceased prospective Corp members and the bus driver who died in an auto crash yesterday in Mokwa, Niger State, on the way to their state of deployment.

The governor, who wished the six survivors quick recovery, grieved over the death of two prospective corps members and the driver.  According to press statement signed by the chief press secretary to the governor, Rafiu Ajakaye the auto crash was one tragedy too many.

Governor Abdulrasaq has however directed all relevant agencies of government to put adequate measures in place to forestall such occurrence in the future.

Following the incidence, an appeal has gone to the federal government and relevant agency to increase the closing date of resumption of corps members to two weeks as against two day order by the National youth service Corps, NYSC.

One the parents, Mrs Abioye Adekanmi who spoke with our correspondent olarotimi oshin lamented that the two days ultimatum is too short for Corp members to resume to long distance state.  According to parent, car parks and roads are always too busy within the two days as intending Corp members are always in haste to meet up with the deadline, which sometimes results to serious accident due to high speed.

Another parent, Mr Babafemi Taiwo said the intending Corp members are always fond of hasting their drivers in order to meet up the two days target.

One of the intending Corps Members who died graduated from Kwara state polytechnic. In his reaction, the rector of the polytechnic, Abdul-jomoh Mohammed also called for extension of camp closing days on intending Corp members. He noted that the roads are too bad and busy for students to meet up with the two days ultimatum order by the NYSC.