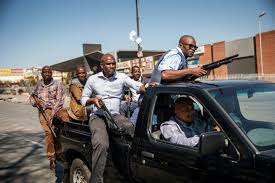 Angry set of protesters loot alleged foreign-owned shops today in a new wave of violence targeting foreign nationals in the Johannesburg suburb of Turffontein on September 2, 2019 as a result South Africa and Nigeria stepped security on Wednesday after deadly attacks on foreign-owned stores in Johannesburg triggered reprisal assaults on South African businesses in Nigerian cities.
Amid mounting concern for relations between South Africa and its neighbours and Nigeria, the continent’s most populous market, President Cyril Ramaphosa reiterated his condemnation of the violence stating that they face a huge challenge and that a number of people are taking the law into their own hands. He emphasized that South Africa is a home for all and condemned the attack against foreign citizens.
In Nigeria, police on Wednesday said security had been strengthened around South African businesses after apparent reprisal attacks in several cities against stores operated by the supermarket chain Shoprite, the telecoms giant MTN and other firms.
In the capital Abuja, a crowd of more than 100 demonstrators clashed with police outside a shopping mall which has a Shoprite store. They burned tyres and hurled rocks before being repelled by a dozen police. Nigerian celebrities also took to social media in outrage, with music star Burna Boy leading calls for a boycott of South Africa while fellow stars Teni the Entertainer and Davido condemned the violence.
On Tuesday, Nigeria summoned the South African ambassador for talks and said President Muhammadu Buhari was sending an envoy to convey his displeasure to Ramaphosa.

Worried neighbours
Similar messages of concern have been voiced by South Africa’s neighbours.
In Zambia, about a thousand students demonstrated on Wednesday outside the SouthAfrican embassy in Lusaka, as President Edgar Lungu urged measures to prevent xenophobia from escalating into “genocide.”
In Zimbabwe, President Emmerson Mnangagwa said: “We strongly condemn all forms of hate driven violence and applaud the South African authorities for the swift way they have responded.”
In Botswana, the ministry of international affairs and cooperation urged all citizens living in or travelling to South Africa “to exercise extreme caution… (and) avoid areas where unrests are currently occurring.”