A local radio station that has been involved in the fight against Ebola in eastern DR Congo said Monday it was closing down after one of its broadcasters was murdered.

Joel Musavuli, head of Lwemba radio in Mambasa in Ituri province, told AFP that the station had been targeted by armed groups hostile to the campaign to roll back the Ebola epidemic.

“Each of us have received threats since last month. We have now decided to stop broadcasting, Musavuli said, adding that he himself had escaped two kidnap attempts.

“We are victims of our commitment to the awareness campaign about the spread of Ebola virus disease. We don’t know why the militiamen are targeting us.” 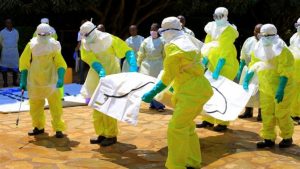 Nearly 2,200 people have died since the notorious haemorrhagic disease erupted in the eastern Democratic Republic of Congo in August 2018, according to the latest official figures.

Nearly 2,200 people have died since the notorious haemorrhagic disease erupted in eastern Democratic Republic of Congo in August 2018, according to the latest official figures.

The fight against the outbreak has been hampered by local fears and superstititions, exploited by militia groups that are rampant in the remote region.

Several health workers have been killed and media that have supported the campaign have received threats. Several radio stations in the Mambasa area say they have stopped broadcasting anti-Ebola messages because of intimidation.

On November 2, Lwemba broadcaster Papy Mahamba was killed at his home by unidentified men. His wife was injured and their house set ablaze.

The station said the authorities had failed to take action against the threats. It said it would resume broadcasts after “the state has restored authority in the area”.