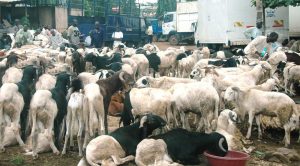 Major ram markets including Zango, Bachama road, Rigasa and others within Kaduna metropolis had recorded low patronage amidst availability of many rams.

Alhaji Idris Saminaka, a livestock trader at Bachama Road market, said that most of them had given up on their expectations of a huge boom in rams’ sales.

Saminaka said he had sold only fifteen out of the eighty rams he brought to Kaduna four weeks ago.

“The economic situation has contributed to the low patronage and is affecting even our pockets.

“The hope we have is very small, as the festival is two days from now, we pray to make some sales before then to enable us go home with smiling faces.

“Returning the animals to Saminaka will be a great loss to me because of the expenses incurred transporting them and feeding them here in Kaduna,” he said.

Another ram dealer, Yakubu Danlasan, also blamed the current economic situation amidst other responsibilities as responsible for the low sales being recorded.

“The Naira doesn’t have much value now, the present economic situation has now become a factor to consider while spending money, people now spend money on what they can afford, it is not easy to us selling the rams and also the buyers.

“We would like to at least make little profit on what we spent feeding and paying for stalls for our animals, but the customers don’t realize that.

“Although people want to buy rams for the festival, they cannot afford to due to the economic situation in the country.”

Danlasan believed that the price would crash as many traders would not want to return back with the animals.

Yusha’u Mutukaraba, a seasonal ram seller at Zango market, blamed the low patronage as a result of the rise on the cost of breeding livestock.

“The patronage is low because the animals are costly, we are not willing to sell below the expenses of transporting and fending for the animals we incurred, business is done in order to make profit,” he said.

Mutukaraba, however, said that they would eventually break the prices hopefully after the Eid prayers in order to get money to take care of other problems