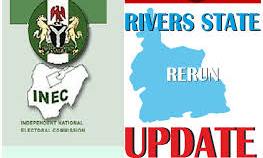 The All Progressives Congress, APC, won Akuku Toru two while the PDP candidate Tonye Alalibo was disqualified. The APC also won Opobo, Nkoro state constituency thus making a total of two so far captured by the party. The commission said it is still investigating elections in Degema State Constituency while some state, federal and senatorial constituencies were inconclusive because of violence.