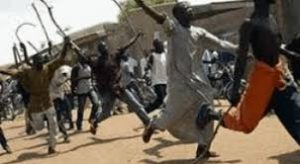 The Nigeria Police Force has removed the Commissioner of Police, Enugu State Command, Mr. Nwodibo Ekechukwu, over the attack on Ukpabi Nimbo in Enugu State by suspected Fulani herdsmen.

The Force Public Relations Officer, Bisi Kolawole, confirmed on Tuesday that Ekechukwu had been posted out of the state to another command.

She, however, did not state why the police boss was redeployed.

“The Enugu State CP has been posted out of the state to another command and a new CP, Emmanuel Ojukwu, has taken over. The redeployment is part of strategies to improve police effectiveness across the country,” she stated.

On Monday last week, no fewer than 20 persons in Ukpabi Nimbo, an agrarian community in the Uzo-Uwani Local Government Area of Enugu State, were killed while many other residents were injured during an attack by Fulani herdsmen.

It was learnt that scores of armed cattle breeders, reportedly numbering more than 100, stormed the sleepy community in the early hours of the day.

The police high command was said to have been angry due to the fact that the villagers had informed the state police command about the impending attack but the formation did nothing to forestall the killings.

Many Nigerians were angry due to the fact that the police authorities had to wait for instructions from the Presidency before taking action against the culprits.

Ironically, it was reported in March that 76 residents of Ugwuneshi autonomous community in the Awgu LGA of Enugu State, were arrested while attempting to rescue their wives from the captivity of the Fulani herdsmen.

None of the cattle rearers, who were allegedly the aggressors, was arrested.

Meanwhile, after weeks of seeming reluctance, President Muhammadu Buhari said he had ordered heads of security agencies to take all necessary actions to apprehend rampaging herdsmen who had continued to wreak havoc on different communities across the country.

According to a statement on Tuesday by his Special Adviser on Media and Publicity, Mr. Femi Adesina, the President spoke while receiving members of the Catholic Bishops Conference of Nigeria at the Presidential Villa, Abuja, on Monday evening.

The President, who was reacting to reports of continued attacks by gun-wielding herdsmen, restated his administration’s resolve to deal decisively and expeditiously with the matter.

“We are determined to secure all Nigerians and I have told the Inspector-General of Police and other security agencies, in very strong terms, to deal decisively with the attackers,” the President said.

Buhari expressed his personal condolences to the Catholic Bishop of Enugu, the people of Ukpabi Nimbo and all other communities that had suffered fatalities and other losses from the recent attacks.

Speaking on other national issues, the President assured the clerics that he was acting with deliberation and moving methodically to implement his change agenda for the good of the country.

“We need to rebuild our institutions methodically, we need to change the way we do things.

“In the last 10 years, crude oil sold for more than $100 per barrel, but Nigeria did not save.  That is why we have found ourselves where we are today,” President Buhari told the Catholic Bishops, led by Most Rev. Ignatius Kaigama, the Archbishop of Jos.

The President assured them that his administration was working very hard to fulfil all the promises it had made to Nigerians, adding that his greatest motivating factor was the desire to bring positive change to Nigeria.

On behalf of the bishops, Kaigama expressed the support of the CBCN to the President.

“We are willing to collaborate with you and with your administration in which we see hope for a greater Nigeria,” he told the President.

The bishops pledged continued prayers for Nigeria and the government, expressing their conviction that current the hardships were temporary and that Nigeria would soon overcome its present difficulties.

The Catholic bishops also declared their support for the ongoing corruption war being waged by the Buhari administration.

The meeting, which started at about 9pm on Monday and lasted for over one hour, was held inside the First Lady’s Conference Hall at the Presidential Villa, Abuja.

The President of the CBCN, Kaigama, briefed State House correspondents at the end of the meeting, which was also attended by Vice-President Yemi Osinbajo and the Secretary to the Government of the Federation, Mr. Babachir Lawal.

Kaigama described corruption as a social disease, which must be dealt with if Nigeria must move forward.

He said, “Since 1960, the Catholic bishops have been talking against corruption, telling people to avoid it.

“It is a cancer, it is dangerous, it is a sickness and it is a social disease.

“We have assured the President that we are 100 per cent with him in his fight against corruption.

“So corruption is a huge obstacle that has to be dismantled.”

Kaigama also described the recent attack on the Catholic Archbishop of Abuja, Cardinal John Onaiyekan, and other attacks carried out by suspected herdsmen across the country as acts of criminality which must stop.

The bishops also faulted government at all levels for imposing sundry levies on the church’s educational and health institutions.

While seeking the President’s help in that area, Kaigama also made a case for the provision of worship places in public schools across the county.

He added, “Area of education is our strong point in Catholic church. We build character and if that is defective, you can never have a well functioning nation.

“Sometimes, we are slammed with levies in schools and hospitals instead of government giving us help and supporting us to do more to the people, they demand so much from our institutions and even impose levies on students and other people who make use of our facilities.”

He said the delegation found the President a committed and sincere leader who wants the best for his country.

“With that, criminalities and other things that are anti-social will give way. We have every hope. We only need to be a little more patient.

“The President has explained to us the difficulties, challenges, bottlenecks that are there and we understood him fully.

“We equally call on Nigerians to give the President a chance.”

The President’s directive to stop the Fulani herdsmen’s menace notwithstanding, the National Coalition of Yoruba Youths and Students has warned against persistent killings by people suspected to be Fulani herdsmen.

The Coordinator, Sunday Asefon, said the youth in the South-West would be mobilised to repel the wanton killings and destruction of properties by the assailants.

Asefon, who spoke during a memorial lecture organised in honour of a former Deputy Governor of Ekiti State, Mrs Funmilayo Olayinka, pointed out that the senseless killings in Enugu, Benue and other states showed the weakness in the country’s security.

Olayinka served as deputy to former Governor Kayode Fayemi between October 16, 2010 and April 6, 2013, when she died of cancer.

Asefon added, “Let me sound a note of warning to these suspected Fulani herdsmen to be careful because any attempt to invade our land shall be repelled by the youth and students of this zone.

“We won’t allow aggressors to oppress and suppress our collective will. The Presidency must rise to the occasion by letting its body language, in discouraging this dastardly act, be felt in every corner across the country.

“We will continue to embrace the change agenda of President Muhammadu Buhari and offer useful advice when necessary.”

Delivering a lecture entitled, ‘Women contributions to democratic development in Nigeria’, a member of the seventh House of Representatives, Bamidele Faparusi, advocated more leadership positions for women in government.

Faparusi, who was represented by the Chairman, Nigerian Bar Association in Ado Ekiti, Dr. Foluke Dada, urged the Federal Government to comply with the 35 per cent affirmative action by appointing women into higher positions.