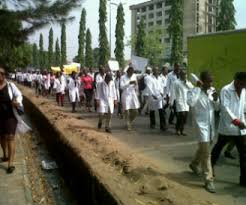 Health workers in Ondo West Local Government Area of Ondo State on Tuesday paralyzed social and economic activities in the town, protesting against the nonpayment of their five months’ salary by the state government.

The workers, which include, doctors, nurses, pharmacists, laboratory technologists, trooped to the streets in their hundreds, threatening to down-tools if the state government failed to address the issue of their salaries soon.

One of the protesters, who spoke with newsmen, said that they decided to organize the peaceful protest to register their dissatisfaction about the continued silence being maintained by the state government over their salaries.

The Ondo State Commissioner for Information, Mr Kayode Akinmade, appealed to the protesters to be patient with the government, saying efforts are ongoing on how to pay their salaries.