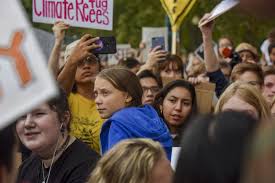 German Chancellor Angela Merkel’s coalition government has agreed to set a price on carbon emissions in a bid to meet a 2030 climate target of cutting greenhouse gases by fifty-five percent on 1990 levels.

The package, estimated to cost fifty-four billion Euros by 2023, was settled as Hundreds of thousands of protesters, many of them students who skipped school, gathered in cities across Asia and Africa, kicking off a day of worldwide protests calling for action against climate change ahead of a UN summit.

From the Pacific Islands to Australia, India and some African countries, protesters took to the streets today, demanding their governments take urgent steps to tackle the climate crisis and prevent an environmental catastrophe.

Organisers estimated 300,000 people turned up for the “global climate strike” in Australia, the world’s largest exporter of coal and liquid natural gas. Protests were staged in 110 towns and cities across the country, with crowds calling on the government to commit to a target of net-zero carbon emissions by 2030.