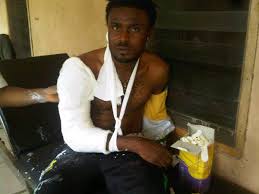 Kano Pillars captain, Gambo Mohammed, will undergo further tests today to ascertain if he is fully fit to return to action after he sustained a head injury in his side’s match day twelve fixture against Rivers United last weekend.

The forward was immediately taken to the hospital after he suffered a rupture of the tympanic membrane following a mid-air collision with Rivers United Ghanaian hitman Wilson Andoh.

Gambo travelled back to Kano on Tuesday accompanied by Pillars team doctor and secretary.

Gambo, who has been capped at full international level by Nigeria, missed the start of last season after sustaining gunshot injuries following an attack on Kano Pillars team bus on their way to honour a league match against Heartland Football of Owerri