Written by Morenike Adebayo on August 6, 2016 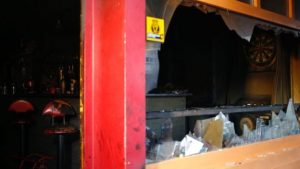 A fire during a birthday party at a bar in the northern French city of Rouen has killed at least thirteen people and injured six. The victims were mostly young people aged between eighteen and twenty-five. Candles on a birthday cake started the fire at the Cuba Libre bar, which began around midnight today.

The polystyrene ceiling of the basement room where the celebration was taking place caught fire, according to AFP. Interior Minister Bernard Cazeneuve said more than fifty firefighters were called to the fire. He said an inquiry is now under way. One of the injured people is in a serious condition. Terrorism has been ruled out.